A dire week at work led me to this narrow doorway just off Regent Street. Before me, stood a man in glorious technicolor, a turquoise embroidered gown reflecting in the glow of his gold silk turban. Above him a rainbow of lanterns twinkled in the perfect antidote to the grey outside as I requested a table for one.

The doors slid open to reveal two more suited ladies behind a black reception desk who swiftly saw me  to my seat on a long couch with a view of Regents Street.  My overwhelming feeling, however, was that this place was conflicted. On one hand, with its polished maple tables, silverware and  white tablecloths, this felt like an impersonal, stiff upper lip, prim and proper fine dining restaurant, but its slightly grubby junkshop rug and smattering of more of the multicoloured lanterns I’d seen downstairs  suggested it was trying to create a certain ambience, an  authenticity which was quite opposite.

The cocktail menu was frustratingly skinny, but I settled on a hibiscus drink which transpired to be little more than cheap fizz poured over a jar flower. Then I tackled the menu which I had anticipated being difficult for me as someone with allergies to onion and tomato, but, credit where its due, the manager proposed a suitable solution. 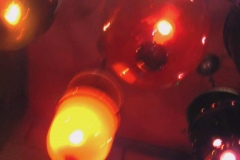 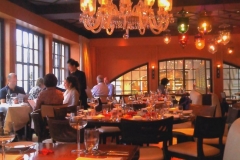 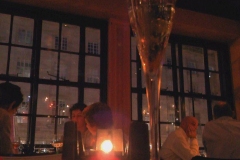 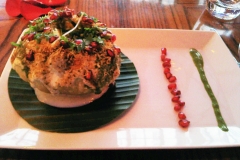 The starter,  Raj Kachor which was described as regal street food, was a large pastry puff decorated with herbs and jewel-like pomegranate, surrounded by a raiita and filled with a creamy, spicy vegetable mixture. The crispness of the pastry, zingyness of the pomegranate and spicy cream complemented each other but the portion was far too big and left me  feeling as though  I’d eaten five chicken coronation sandwiches. It did look good though.

My main comprised a slightly strangely portioned set of two chicken breasts each stuffed with nuts and apricots. Having been convinced by the manager’s suggestion, I accompanied this with a selection of vegetables in a mustard rich sauce and traditional flaked bread. All were tasty but none overwhelmingly so.

Still a bit sickened by the size of the starter, I couldn’t eat everything, so decided to ask for a doggy bag when I got the bill. I hadn’t anticipated what a task this would be, fifteen minutes of trying to beckon a waiter over and finally one approached, only to respond to my doggy bag response by advising me he didn’t know because they were ‘very busy’. I surveyed the restaurant, noting several empty tables and wondered what their idea of quiet would be.