I’d walked past the sister restaurant to Les Deux Salons and Wild Honey many a time. While facinated by Abutus’ ability to use previously ill-regarded cuts of meat and still change handsomely for them, dishes such as crispy  trotters, pigs head and tripe never quite had the pull needed to get me through the door.
This  time, however, I felt like something different and,  before I knew it, I’d moved from the broodingly lit menu on the dark and inviting restaurant front through the door and into Arbutus’ surprisingly classy-minimalist interior.

Greeted immediately by a black suited woman I was shown to my table and invited to choose from an extensive drinks list whose starring feature was the availability of wine by the 250ml carafe. Soon after, I was availed of piece of bread from the most polite basket wielding gentleman I have ever had the pleasure of meeting which I nibbled on while arriving at the choice of a Squid and mackerel ‘burger’ for starters. 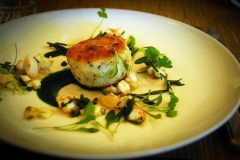 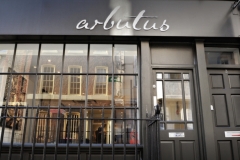 At around £11 I had high expectations for this fish fix but sadly, while the colours were vibrant and the dish presented perfectly,with a slightly gritty, suspiciously loose texture and overly fishy aftertaste the flavour left a lot to be desired.
Unfortunately, the perfectly plain dining room had little to distract me, with its selection of wooden topped, metal posted, and aggressively tall  white tables standing somewhat clinically against plain white walls and  monochrome prints offering little more than a hint of french cafe character.

On to the main course, I ordered cod with grilled razor clams and sea purslane (£18) and was, yet again, disappointed. While it was perfectly palatable it was certainly not a delight and the presentation of the dish was much as ones meal might be having been retrieved unthinkingly from a refrigerator side on, the night after it was made.

All in all, I could not fault the service which was slick, polite and appropriate. But the soulless dining room in stark contrast to its outside appearance and below par food was certainly not worth the not-insignificant price tag. Not one I’ll be returning to in a hurry.