If your first experience of Bawarchi was their website, you could be forgiven for having high expectations.

Apparently Bawarchi translates as ‘The Master Chef’, an experienced expert. Ironically, this was undoubtedly the worst experience I have ever had at the hands of any chef, at any restaurant.

I arrived at Bawarchi with my boyfriend and his mother for a celebratory meal. We were the only customers and the man loitering behind the counter tended to us immediately, seating us on the kind of purple and red chairs usually sold in pop up furniture outlets squatting in disused Christmas shops.

As we were seated we told the waiter of my allergies and he explained proudly that the food was all freshly made to order so my allergies could of course be accommodated.

Deciding on Butter Chicken, I called the waiter over and reiterated that onion and tomato would land me in hospital if I consumed them, then asked if a version of butter chicken would be viable without those ingredients. He assured me it would be fine. 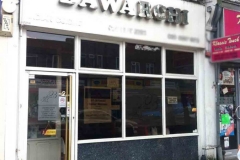 “What’s in it then?” asked boyfriend’s mother.

“Chicken” said the waiter, who, despite his response, we sadly suspected wasn’t trying to be sarcastic.

“But what actually makes it red” said boyfriend.

“Food colouring” said the waiter with absolutely no shame or concern.

Six mouthfuls in, my boyfriend eyed me across the table as I suspiciously pushed sauce around my plate. I explained that I couldn’t fathom what the sauce was made of; I had hoped that it was cream or coconut, coloured by chilli or spices but the texture just didn’t add up.

My very tolerant boyfriend proceeded to call over the waiter and check again that there was no tomato. He was told no.

“Sorry, but what actually makes the sauce then?” I interjected, wary of being the most irritating customer ever.

“It’s pretty serious an allergy” chimed in my boyfriend

“Can you find out? I’d just like to know so I can recreate sauces myself that are allergy safe!” I said trying to lighten the mood.

The waiter who, by now, was one stage off rolling his eyes said it was definitely not tomato but he could ask the chef what the sauce was made from and promptly disappeared into the kitchen.

“Chef advises you to stop eating that” he said, gesturing meekly towards my dish.

“Because the sauce has tomatoes in” he responded with a remarkable calmness.

“Butter chicken is made with a tomato base”

“But we told you she was allergic, you said it would be fine to make a variation, if it wasn’t possible you should have told us, not served it to her” my boyfriend responded, gobsmacked.

The waiter proceeded to wave his order pad in front of us “I wrote it down, no onion or tomato, but

Clearly the waiter had not advised the chef that it was an allergy and clearly, it was to much to ask of the chef, hard pushed as he was serving an empty restaurant, to  have clarified the waiter’s request.

Either way, it was beside the point for me who now faced an almost certain medical disaster.

Immediately descending into panic mode, boyfriend and I abandoned his mum and hurried back to his where I established that I hadn’t sufficient medication for such a catastrophe and, given it was  a Sunday, that my boyfriend now had a long night ahead of him finding an out of hours service to provide it.

I was in the bathroom, attempting to rid myself of the food when boyfriend’s mum arrived home and delivered the punchline; as she had gone to leave the waiter had asked if she wanted to take the leftovers. Hating waste, she accepted, and bafflingly they then wrapped up my abandoned dish, discarded all other remaining food then proceeded to charged her for all of the meals, saying that, as she was taking the butter chicken, she should pay for it too.

Hearing this my boyfriend took the bag of leftover butter chicken and returned to the restaurant demanding a refund. Astonishingly, the manager, who had surfaced by this point, stated that the dish always has tomato, as though we should have expected to be served it regardless of how many conversations we’d had with the waiter where he has reassured us otherwise.

The manager consequently refunded the butter chicken and cooked a new dish for me. But I found out later, when I awoke from my medicated haze, that Bawarchi had still charged for boyfriend and his mother’s meals even though the evening had been ruined by their incompetence and much of the food had not been eaten.

Bawarchi’s website declares that they provide high levels of satisfaction to  customers. I left feeling I had suffered an attack both physically and financially, been disrespected and disregarded. Bawarchi’s website also says they let their cuisine forge its own reputation.  They certainly achieved that.

The restaurant website states that the management are ‘extremely swollen’ and I can only think they also aim to ensure their allergic customers are too. One to avoid at all costs.