If you’ve ever been to Soho with a media-type or even walked along Wardour Street minding your own business, you probably know about Inamo. Because, Inamo is pan-Asian cuisine with a twist, that twist being a truly unique digital ordering system.

Its Japanese, Chinese, Thai and Korean influenced menu with a squeeze of trendy westernisation – see the Berkshire Pork Neck with spicy chocolate sauce – really works, but its the tables, not the food, you’ll remember.
Even from outside, you can’t help but be enthralled by myriad colours which softly glow over each table picking them out from the otherwise dark
surroundings.
We received a warm welcome as we entered, fascinated by our surroundings. Each table was decked with a large white plate, chopsticks and vivid digital tablecloth, beamed from a high-tech projector above. We hadn’t booked but were advised that we could wait half an hour downstairs in their cocktail bar, after which a table would be available. I was surprised to find that the downstairs bar was not nearly as chic and pleasing to the eye as the restaurant, with no quirky twists or distractions to the eye and none of the uniqueness which set its parent out from the crowds.
After fifteen minutes we were shown upstairs to our seats, the friendly waitress demonstrated how to order food, using a finger operated trackpad set into the table to control the interactive menu projected on to it. Drinks and food were all there, sensibly structured and perfectly thought out, even down to the
wonderfully arty touch of each dish displaying digitally on your plate as you browsed its description.
No detail had been missed, for, once we’;d ordered by simply clicking the item and confirming, we were able to watch the chefs working in the kitchen, call the waitress over and change the pattern and colour of our tablecloth all from the comfort of this intuitive digital system. We even passed the time waiting for our food supping our swiftly delivered Oriental Rose cocktail and beer whilst playing a game of interactive battleships, not that we’d want time to pass any quicker in this place. 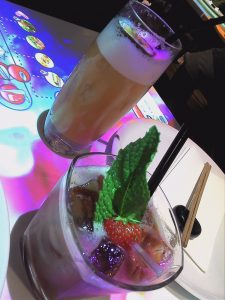 When our dishes, Baby Crispy Prawns with Thai mango relish, Berkshire Pork Neck with confit of apple, and spicy chocolate sauce and Sake Salmon wrapped in cedar wood with ginger butter sauce, arrived, they didn’t disappoint, as good to look at as they tasted.
Somehow the spice in the chocolate sauce brought out the depth of the flavour in the fine cut of pork and ensured that it worked as a distinctly savoury dish. The succulent sake marinated salmon, paired excellently with its ginger butter sauce, was also delicious but I felt that the cedar wood box, which could have really lent something to the flavour, actually added nothing and served only to make the salmon difficult to get at.

We were too stuffed to order any other food, and besides, we’d been so busy enjoying the surroundings and playing with the interactive menu that we’d not noticed the time, we had just half an hour to order the bill (via the interactive table) and get to our last trains.

In conclusion, this is the perfect tonic to the increasing number of London eateries which indulge in style over substance;. Inamo has both delicious food and fantastically modern, dazzling surroundings. It does gimmick without a hint of tack and serves with a speedy slickness that can’t fail to impress, but go for pre-dinner drinks elsewhere.
Inamo
134-136 Wardour St
Soho
W1F 8ZP