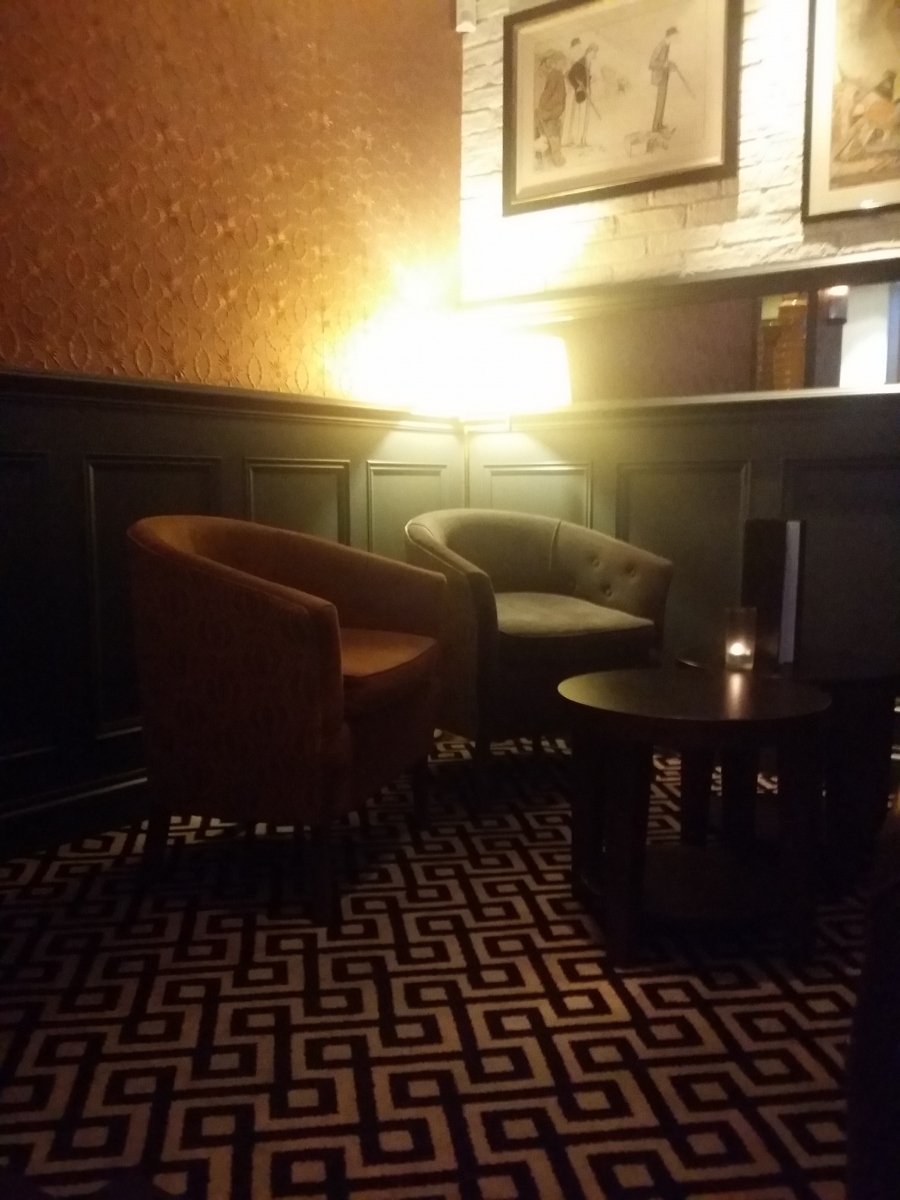 I first visited Mandeville Hotel’s restaurant some time ago when it was Deville, a bold, glitzy chaise-loungey afair of chandeliers, silver-grey and muted pastels whose bar looked like something Butlins would have considered ‘modern’ in 1999. At the time I sampled a delicious tonka bean cocktail from their imaginative cocktail menu, which, as a then tonka virgin, definitely left me impressed.

Today, Deville has been replaced by Reform bar and social which their website describes as quintessentially British, taking inspiration from classic British gentlemen’s clubs. 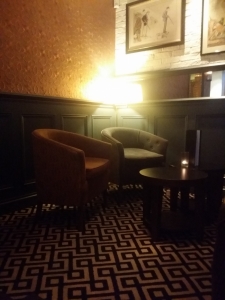 Entering the bar which looked distinctly like a low-budget replica of a train station boozer, I couldn’t help feeling they were doing ‘brittishness’ a disservice. Wildly patterned carpet lined the floor on which Harvester style tub chairs sat lonely in the dark but for a small ikea-esque table and and single candle. Empty and characterless, the only thing missing was the smell of stale long since smoked tobacco and the sound of the 5.45 to Streatham blaring over the top.

Seconds after we’d sat down, an immaculately presented waiter approached the table and jokingly offered me a Bloody Mary, a reference to my allergies. We’d advised of my allergies to onion and tomato when I booked to make sure the meal included in our Groupon voucher would be suitable. Declining the Bloody Mary, we commented on how refreshing it was to see that the allergies were so well communicated among the team that even the bar staff knew. 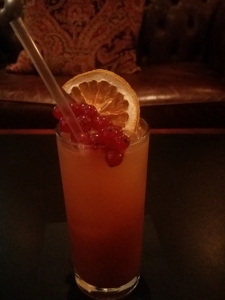 As our Groupon for dinner included a bottle of wine, we opted for a virgin cocktail each. There were only three to chose from but they all sounded delicious, and I selected an Earl Fizz comprising orange and lime juice, raspberries, earl grey syrup and soda water. Boyfriend opted for an English Garden, comprising apple juice, lime, mint and grapefruit syrup. Both were perfectly palatable and just what we needed, even if I was slightly baffled why my drink had no sign of raspberry and came garnished with redcurrants instead.

We moved through to the dining area, hungry for our two course lobster burger or steak meal. We were tended to immediately by a maitre d’ who made reference to my allergies again and swept away our coats before handing us over to a sweet faced gentleman who seated us. 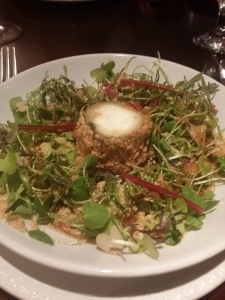 My decision on a starter was easy: baked golden cross goats cheese, mustard leaf and truffle honey. Boyfriend opted for a ham hock and watercress salad, a dish which, if you believe the spelling of the online menu, includes real warts.

Boyfriend was satisfied with his dish and mine was reasonable but neither were presented immaculately and the goats cheese had a rind which was so gritty as to make it a tad unpleasant. The honey was an interesting and tasty touch but overall the starter did leave me feeling a little like I’d sprinkled stale toast with honey over a bit of cheese I found at the back of the fridge, three weeks out of date.

Moving on to mains, we’d only a few choices on our Groupon – steak or lobster burger. We ordered one of each and a side of purple sprouting broccoli and supped on a glass of tasteless red while we waited. 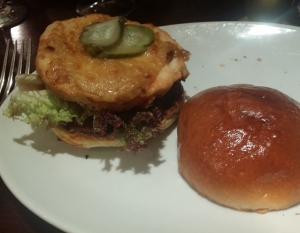 On its arrival I was amazed to find that my main course had been garnished with onion and tomato, the two things we’d advised I was allergic to when we booked. They’d advised that the only part of the dish that usually contained those ingredients was the garnish and that they’d do it without. I decided to just remove them and not raise it with the waiter.

The dish came with chunky fries which were perfectly salted and undeniably delicious but my burger, looked bizarre and anaemic like an under cooked Iceland chicken burger. What’s more, on writing this review I’ve learned that the burger is actually 67 per cent not lobster, comprising pollock and crayfish for the main part, but given what else I found in my meal, this pales into insignificance.

I was just contemplating whether the broccoli I’d been served was in fact purple sprouting broccoli as advertised given that it was not as thin, delicate and, well, sprout like, as it has been on every occasion I’ve had it previously, when I sensed an unfamiliar taste in my mouth. Poking the burger to the side, I found white sauce similar to tartar, dotted with green and white chunks. Putting my cutlery down and feeling suddenly clammy, I called the waiter over.

“Whatever it is, has the sauce got onion in it? I’m allergic to onion and I’ve eaten some so of it, we were told this dish would be fine for me, but it tastes like onion.”

The waiter looked fearful and nearly ran to the kitchen.

When he returned, he explained that the sauce had shallots in it.

“Please, you must make sure you tell me if you have an allergy.”

We reiterated that we’d already advised of my allergies and been told it would be fine, then been told by the maitre d’ and the bar staff that they were aware. At this, the waiter sighed and apologised, asking if I felt ok. I didn’t. I was sweating and my face was burning up.

The waiter offered to bring me a new burger without sauce or garnish and disappeared looking as though he was about to cry.

Suddenly an older, smartly suited man appeared at the table.

“I understand you have had some problem with your dish,” he said serenely but seriously.

“I know what will fix this.” he said, this time making a definite statement.

I sat up straight giving him my full attention, this could be revelatory, after all, I’ve had allergies since I was 16 and none of the three hospitals or six specialists I’ve seen have ever figured out how to fix it! What wonder that a smartly suited restaurant employee might hold the answer… 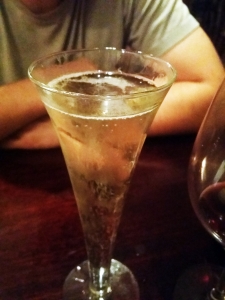 Oh. Not quite the groundbreaking medical advice I was hoping for.

Doing well not to roll his eyes, the man proceeded:

“Champagne? It’s all in the bubbles you see.”

I accepted, and the man, who I can only assume was the manager, then offered me any meal from the main menu in replacement of a sauceless lobster burger. Then, as quick as he had arrived, he disappeared again.

Shortly after, sweet faced waiter man surfaced, still looking as though he was on the verge of a nervous break down, but in a way absolutely fitting of someone who has unwittingly potentially injured a customer. He gave us a glass of champagne each and apologised again, taking my replacement order of fish and chips- not what I wanted but the only straight forward safe thing on the menu. 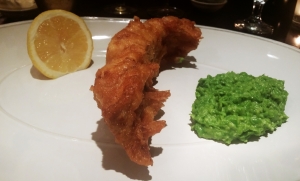 The fish was delicious. Totally fresh and the batter was deliciously crispy. They even made me special mushy peas without onion. They accompanied it with another dish of “purple sprouting broccoli” which I still was not convinced of, and more scrumptious chips.

When the bill came, as you’d expect, we’d not been charged for the champagne, extra meal, or sides but the bill did come to around £75 including the cost of the groupon voucher.

I know this is Marylebone, so you shouldn’t expect to get much for your pound, but I definitely didn’t feel like I’d got a deal on what was essentially, pub grub, served in a place with less ambience than a library and worse decor than a Travelodge would have had in the 70’s.

For it to have replicated a gentleman’s club, it would need to have been more sensitively lit, creating cosy corners with a smokey elegance. As it was, the most British thing about Reform bar and grill was the eccentricity with which we were served, and the polite and charming way in which the manager appeared and attempted to rectify the situation.

Would I go back? Despite the near death experience, thanks to the way they handled their mistake, I probably would venture back, but only if I had a deal or voucher, otherwise, I really can’t see this being worth the money.